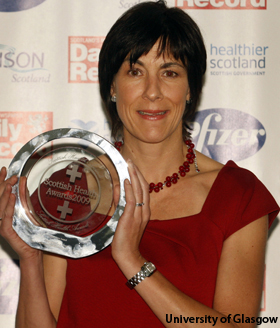 Professor of Experimental Haematology at the University of Glasgow, Tessa Holyoake, has been awarded a distinguished accolade for her work in the field of cancer care and research.

Professor Holyoake, who is also director of the Paul O’Gorman Leukaemia Research Centre, was presented with the Cancer Care Team Award at the Scottish Health Awards last week.

Professor Holyoake said that she was honoured to receive the award.

She said: “I am delighted to accept this award on behalf of all who work at the University of Glasgow’s Paul O'Gorman Leukaemia Research Centre. I would also like to thank the clinical research team and the NHS staff at the Beatson West of Scotland Cancer Centre for all their hard work and commitment.”

Dr. Kevin Hanretty, a senior clinical teacher in Reproductive and Maternal medicine at the University of Glasgow, was presented with the award for women and children’s health services.

He said: “The University of Glasgow welcomes all positive recognition for the work and achievements of its staff. Cancer is one of the University’s key areas of medical research. The research carried out by Professor Holyoake and others in the division of Cancer Sciences and Molecular Pathology at Glasgow, is of a world class standard.”

Professor Holyoake had been short-listed in the Cancer Care category thanks to a nomination from a grateful patient from Hamilton, who was given only five years to live after being diagnosed with cancer.

His nomination impressed the judges as he described Professor Holyoake as an “angel” and spoke of how he and many others around the world owe their life to her.

Secretary for Health and Wellbeing Nicola Sturgeon commended the achivements of all the nominees.

She said: “The winners of this year’s Scottish Health Awards have been recognised for making a special contribution to healthcare. With over 300 nominations received across 17 award categories, many of these from patients and the public, it is no doubt that there is a great affection for NHS Scotland and those who work in it.

“I would like to congratulate the winners and the runners up for their enthusiasm and commitment to improving patient care in Scotland.”