Views
How freeing the nipple can save a life 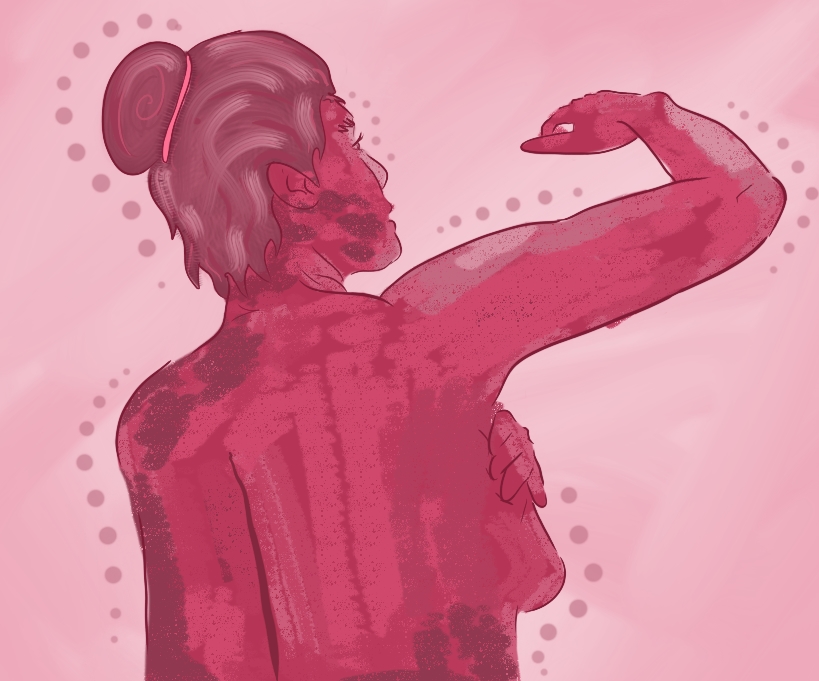 In honour of breast cancer awareness month being over, Morgan Carpenter wants to desexualise our view of breasts.

If you’ve been lucky enough to be around Glasgow for a bout of taps aff weather, you will have witnessed a double standard present across the UK: chests are an inconsequential body part, merely a receptor for Vitamin D … until you have breasts.

With breast cancer awareness month just finishing, my social media feeds are dappled with infographics showing how exactly various cancer symptoms might present themselves on breasts of all sizes, shapes, and colours. These digital illustrations put visuals to the phrases “orange peel skin” and “inverted lumps” that most of us otherwise wouldn’t know how to check for. So many people online are spreading information that could save lives - but shouldn’t it be the job of our healthcare providers?

The NHS website on breast cancer symptoms describes lumps, dimpling, rashes, all without any diagrams or visual aids to help people know what they’re meant to be looking out for. Navigating instead to the page on non-melanoma skin cancer will reveal a number of close-up shots of symptomatology that is reminiscent of breast cancer: “the appearance of a lump or discoloured patch on the skin.” The accurate diagnosis of breast cancer relies heavily on self-examination to catch symptoms early, but many are left to their own devices to find examples of what the actual symptoms might look like. Breasts are not shown in NHS leaflets or publicly accessible advertising because of our society’s pervasive tendency to equate breasts with sexuality.

"Breasts are not shown in NHS leaflets or publicly accessible advertising because of our society’s pervasive tendency to equate breasts with sexuality."

When you think of breast cancer, you may immediately recall the campaigns for Coppafeel, or its rather more vulgar American counterpart Save the Ta-Tas. While both of these well-intentioned organizations do offer visual aids among other resources to help people with breasts keep themselves safe, their messaging problematically furthers the sexualization of breasts and the inherent valuing of breasts over the life of the person they’re attached to. And don’t get me started on the frankly icky non-consensual connotations behind the phrase Coppafeel.

These campaigns also tend to depict breasts as things to be touched or groped - such as in the Spice Girl Mel B’s photoshoot for Coppafeel in which her husband stands behind her holding her breasts in a show of the inextricable link between breasts and their second owners. With the rampant imagery of women and their breasts as objects of the male gaze, the gravity of the epidemic has been cheapened by shallow sexual innuendos like “save second base.”

So much of breast cancer awareness is geared towards sexual gratification, and worse, what they might lose if the women in their lives succumb to breast cancer’s unforgiving grasp. Under the guise of “bold and fun” advertising, the sexual objectification of breasts is deployed as an attention-grabbing strategy.

These booby-forward campaigns have served the purpose of raising awareness of breast cancer, but it’s come at the expense of our oversexualization and survivors’ dignity. Discourse about breast cancer should not rely on the sex appeal of our bodies in order to garner support.

In some ways, the blatant “sexiness” of breast cancer campaigns has helped the cause gain attention, as it is now the second-highest funded research topic in the UK. This style of campaigning, which often features women revealing their totally intact breasts or proffering sexually objectifying images in the name of education, is a symptom of our culture’s larger tendency to commodify everything, including our bodies.

Even breastfeeding, the most basic life-giving action without which the human race would not have survived, is largely taboo in the UK. Despite “Breast is Best” campaigns trying to encourage breastfeeding, only 40% of infants globally are breastfed exclusively up to six months of age. In the UK that figure plummets to just 1%.

In Scotland, it is a criminal offence to ask a mother in public to stop breastfeeding any child up to the age of two. Yet, many new mums fear harassment or shame when they choose to breastfeed in public. The hypersexualization of breasts extends to even this most natural action- despite the NHS sharing information about breastfed babies being generally healthier.

Our culture is comfortable portraying breasts in sexual contexts, but shies away from seeing them in medical or natural and maternal settings. The sexual objectification of breasts puts a particular strain on our abilities to locate essential medical resources that aren’t sexually aggressive or catered to the male gaze.

Our ability to protect ourselves from breast cancer is hindered by our culture’s broad commodification and hyper-sexualization of women, as well as the pervasive detachment of the breasts from the woman.

Combatting this requires greater work on the part of public services to normalise imagery of breasts. The NHS should provide detailed images informing people of the ways breast cancer symptoms present across different breasts (to include various sizes, shapes, and skin colours.) Breasts are not inherently sexual. It’s time we stop acting like demeaning women and their bodies is the only way to bolster the fight against breast cancer.